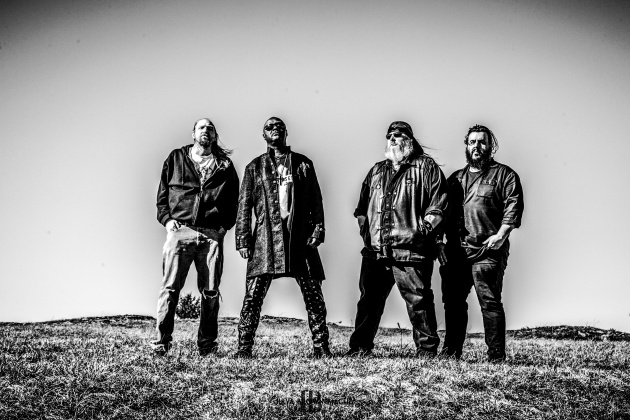 It feels like a legacy, but most likely news that will make every doom heart beat faster: Members of the final lineup of doom legends IRON MAN, have announced their return with SPIRAL GRAVE!

They quickly carved a place for themselves in North America’s heavy music scene, playing well-received sets at New England Stoner Doom Fest or the Maryland Doomfest. Their first single, Nothing, was released by Salt of the Earth Records in mid-2019. But finally the wait is over, since SPIRAL GRAVE have just announced to release their long-awaited debut album, entitled Legacy of the Anointed, in 2021 through Argonauta Records; the Italian powerhouse label and home for all that is heavy, who not only released Dee Calhoun’s recent solo records but also IRON MAN's Hail To The Riff, due out on March 5th!

"Some of the musical ideas that ended up as songs on our debut were initially written while I was still with my previous band but with a rift growing between myself and the other members over personal and musical differences, I decided to hold onto them till I was able to find the right vehicle for them. I wanted to step away from the extremity of my former band and get back to writing songs that were heavy but had hooks and a strong vocal presence. For this band, I wanted to draw from bands such as Dio-era Sabbath, Candlemass, Metal Church, Armored Saint, Mountain, UFO and Judas Priest with enough experimentation that would allow us to branch out on future releases. I wanted that to be the template and I found like-minded friends in the surviving members of Iron Man. I’ve known Dee for over a decade and met Lou and Mot from the scene and affiliations and while I knew working with them would bring certain expectations due to the legendary status of Iron Man, I was hopeful in what we could create and had a gut feeling that it would be great. I was very aware of the fact that you only get one shot to make your 1st impression and being that I was writing a lot of the initial ideas, it meant that I had a lot to prove...not to mention, the scrutiny that I may encounter from people who perceived me as somehow trying to replace Al Morris but you can’t replace a legend so you just try to make your own mark. So Spiral Grave is a new band with a debut album that I think will do justice to not only the scene we come from but those who helped pave the way...“

More details about the upcoming SPIRAL GRAVE release of Legacy of the Anointed, as well as first album tunes, will follow in the weeks ahead, make sure to keep your ears and eyes peeled online at: